Reason Party Leader and Victorian MP for Northern Metro Fiona Patten, has called on the AFL and ASADA to review regulations surrounding banned substances following the provisional suspension of West Coast Eagles player Willie Rioli.  Mr Rioli’s career is now on hold after the AFL announced that a drug test allegedly found cannabis in his system on the night of the elimination final with Essendon.

“Mr Rioli has been provisionally suspended after a positive test for ‘a metabolite of cannabis’ which is an ‘in-competition prohibited substance’ under the AFL’s anti-doping code,” Ms Patten said. “Whilst I understand the AFL places cannabis in a different category to other drugs, such as stimulants like cocaine, in my view, it shouldn’t be a category at all. There is simply no game-day, on-field benefit to cannabis use.

“Mr Rioli should certainly not be facing the prospect of up to a two-year ban for having cannabis in his system.”

Ms Patten is Chair of the Victorian Parliament’s Legal and Social Issues Committee, which has been tasked by the Legislative Council to undertake a major Inquiry into Cannabis Use.

“An incident like this shows why my Upper House colleagues, from a wide range of political parties including the Andrews Labor Government, voted to establish this important Inquiry into Cannabis Use. Community views have changed on cannabis and it’s high time that politicians listened,” she said.

Ms Patten noted that today, another Australian Parliament, the ACT Legislative Assembly, is debating a likely-to-pass bill allowing adult recreational use of cannabis.

“I was in Canberra last week at the ACT Assembly talking with MP’s of all political stripes, including those who wrote the legalisation up for debate, and in my view, it is a step in the right direction. I hope the bill passes,” she said.

Ms Patten urged the AFL and anti-doping agencies, knowing that community views on cannabis use has shifted to the point that parliaments are considering legislative changes, to review their own policies so that players like Mr Rioli don’t face a potentially career ending charge over the use of a substance that most people view in the same category as alcohol. 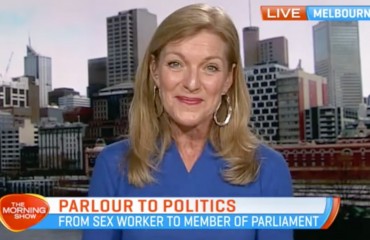 Fiona interviewed by The Morning Show on her new book