Ms PATTEN (Northern Metropolitan) (11:20): My question is to the Minister for Workplace Safety and relates to Central Pier in Docklands. A recent article in the Age revealed that Development Victoria, the agency in charge of Central Pier, knew for quite a few years that the 100-year-old structure was at extreme risk of collapse, before it was shut down abruptly.

The Federal Court documents show that prior to the shutdown on 28 August 2019 Development Victoria had been warned that the pier risked catastrophic failure but delayed acting in an apparent attempt to avoid spending tens of millions of dollars on repairs.

Despite the clear and obvious workplace safety risk, an investigation was never launched, and this put at risk 1300 workers and the thousands of visitors to the pier, so I ask the minister to explain why no investigation was launched.

Ms STITT (Western Metropolitan—Minister for Workplace Safety, Minister for Early Childhood) (11:21): Thank you, Ms Patten, for your question. I have not been briefed by WorkSafe Victoria in relation to the matters that you have raised today.

I note that the matters are before the court, but I am prepared to see if there is any further information that I am able to provide you in relation to WorkSafe in particular.

Ms PATTEN (Northern Metropolitan) (11:21): Thank you, Minister. This has been going since 2013, as I mentioned. After the abrupt closure there was a request to WorkSafe that they conduct an investigation, and this was requested by the tenants at Central Pier.

WorkSafe said that there was no need for this despite the fact that there had been an emergency evacuation of this place. I appreciate that you will look into this, and I definitely ask that you now launch an investigation into how this occurred.

Ms STITT (Western Metropolitan—Minister for Workplace Safety, Minister for Early Childhood) (11:22): I think it is important to indicate that I do not direct WorkSafe in relation to investigations that they may be conducting. They are the independent safety regulator, so their investigative work is at arm’s length from me as minister as well as my office, which is absolutely appropriate.

But, as I indicated in my substantive answer, I have not been directly briefed about this matter, and I will see what information I might be able to provide. 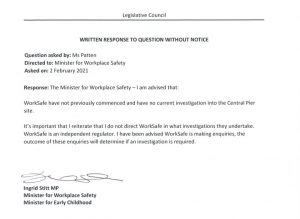