Ms PATTEN (Northern Metropolitan) (12:03): My question is for the Minister for Local Government. Unlike other local governments in Victoria, Melbourne City Council automatically requires businesses to vote in council elections. Not only that, corporations operating in Melbourne city are allocated two votes in the poll. When a company does not appoint its own representatives the council automatically enrols company office-bearers, and many of those companies are offshore. This means that scores of overseas companies are literally casting the deciding votes on Melbourne City Council elections. What steps is the minister taking to ensure that Melbourne City Council elections are operated in a more democratic way, or has the government already ascertained that the flawed system is serving the people well?

Mr SOMYUREK (South Eastern Metropolitan—Minister for Local Government, Minister for Small Business) (12:03): On Monday I outlined a number of reforms which I believe will value-add to the Local Government Bill 2018. One of those proposed reforms—I have put that out for public consultation, and I would encourage you, perhaps, to get back with some feedback—was that we introduce an opt-in system for non-resident property owners throughout other councils, but, you are not going to like this part, apart from Melbourne City Council. We believe there are unique circumstances at play there, so we are treating Melbourne City Council a little bit differently to other councils. For Melbourne City Council, overseas property owners will have to opt in to vote, so that is a proposal we have put up. But by all means, please write to us and make a submission to put your views forward.

Ms PATTEN (Northern Metropolitan) (12:04): Thank you, Minister. I will follow up on that, because certainly the residents of Melbourne city are pretty fed up with it and they do not think it is fair that companies get two votes and that they are automatically enrolled. So I am just wondering: can the minister inform the house if he has met with the Lord Mayor or other councillors from Melbourne city such as Jackie Watts, who has been trying to get traction on this issue, and has he made any promises to them in regard to electoral reform?

Mr SOMYUREK (South Eastern Metropolitan—Minister for Local Government, Minister for Small Business) (12:05): I thank the member for her question. In fact when I was announcing these proposed reforms Cr Watts was there. I spoke to her, and I have made a commitment to catch up with her—I am not sure when that is; that will be in my diary—at some stage in the near future. Obviously the Lord Mayor is a key stakeholder of the local government sector, so I have met with her, and hopefully I will have ongoing discussions with the Lord Mayor.

When I was trying to land on some proposed reforms, I did toy with the idea of going to a Queensland model, which is basically having the Victorian Electoral Commission roll for state elections and the council roll to be identical. That is what Queensland does. What we are proposing to do is to bring Victoria in alignment with the rest of the states throughout Australia. So there is a Queensland model where there is one roll for both the state electorate and local government, and then there is the rest of Australia, which has a non-resident— (Time expired) 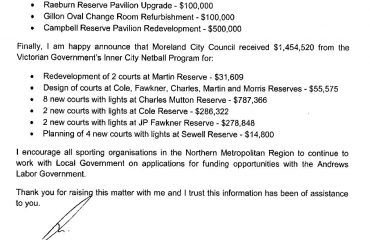