Ms PATTEN (Northern Metropolitan) (18:36): Before I start, I would just like to wish everyone a merry Christmas. I hope you all have a lovely break and come back with renewed energy for this place—

Ms PATTEN: I know. It is day one, but somehow—

Ms PATTEN: Yes. My adjournment matter this evening is for the Special Minister of State, and it relates to electoral reform. As we are well aware in this house, the joint house Electoral Matters Committee is required to inquire into, consider and report to the Parliament on any proposal, matter or thing concerned with the conduct of parliamentary elections and referendums in Victoria. Having sat on this committee in the 58th Parliament, and I hope that I might get the opportunity to do so again, I know that it acts with integrity and has completed some excellent work. But it still remains the situation that those who get elected review the election, and while I know we do this, there still seems to be an inherent conflict of interest. Certainly it could be perceived as that.

I have every belief that the Electoral Matters Committee can and will thoroughly review the 2018 state election, but I also believe that the system needs to be reviewed outside, and outside to us. I know that many of us will have had comments made about the system over the election period. Post-election I have certainly had people asking, ‘How can we do democracy better?’.

We trust citizens juries on complex criminal trials every day. We trusted a citizens jury following the dismissal of Greater Geelong City Council in 2016, when the Victorian government consulted with the community on the structure of its future elected council. That was a groundbreaking engagement process. No other community had ever before had the chance to influence its council structure to this extent. That 100-person jury, which met over four days and considered a wide range of inputs and information, set a fine precedent for a community review of democratic processes.

With that successful process in mind, the action I seek is that in parallel to any work of the Electoral Matters Committee the Special Minister for State commission a citizens jury to review the 2018 Victorian state election and make recommendations to this Parliament on the conduct of future elections.

Revoke the Nicotine ban on Vaporisers 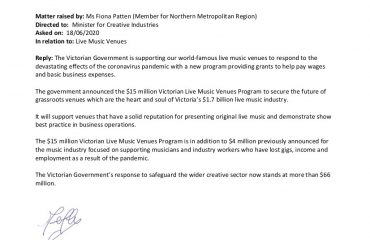