Ms PATTEN (Northern Metropolitan) — My adjournment matter today is for the Minister for Mental Health, Mr Foley. The request that I am making and the action I am calling for is that the government immediately introduce a substance testing pilot scheme.

In the last week we saw another tragedy unfold with the death of Riki Stephens from the Heathcote Saints Football club. He was one of 16 people who were hospitalised on the Gold Coast as a result of taking something — we are not sure what. It could have been one of the synthetic substances called NBOMe; it could have been another called Flakka. They all thought they were taking MDMA, but they were not. This goes to the heart of why substance testing is necessary. People just do not know what they are taking.

We know that 11 per cent of 20 to 29-year-olds have taken ecstasy in the last 12 months — or what they thought was ecstasy — and 7 per cent of 18 to 19-year-olds have taken ecstasy, so it is happening. They need to know what they are taking. Their friends are buying them something and they are thinking that it is all right — and sometimes it is. If we had people going into a supermarket not knowing what they were taking or what they were buying, it would be an outrage.

Yes, I know these substances are not legal, but that is not stopping children from taking them. If we are to stop children from dying, we need to have best practice, and best practice is pill testing. We are seeing it in the Netherlands, Switzerland, Austria, Belgium, Germany, Spain and France. Studies in those jurisdictions show that two-thirds of people who had their drugs tested went on to not consume them. This is a powerful harm-minimisation strategy.

Substance testing works; it changes people’s choices and it saves people’s lives. Given the tragedies that we have seen happening recently, I implore the minister to adopt a pilot pill testing project this summer to save lives, because a number of youth festivals will be happening in our state over that time.

The Victorian Government provides more than $17 million per year to support a number of evidence-based harm reduction activities that are designed to reduce the harm to people who currently use alcohol and other drugs.

As part of this, the Victorian Government provides funding to Harm Reduction Victoria for the Dancewize program, which involves peer educators attending dance parties, festivals and nightclubs.

Drug related overdose can occur for any number of reasons including the size, weight and general health of a person, as well as whether the person is used to taking a particular drug or if they have taken other drugs at the same time. Pill testing kits are not a guarantee against overdose. 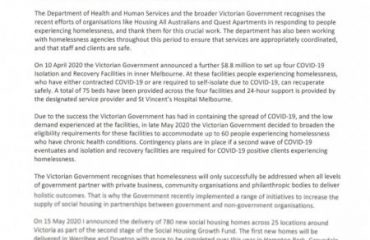