Ms Patten (Northern Metropolitan) : My adjournment matter is for the Special Minister of State, Gavin Jennings, on the matter of national Wattle Day. As we know, tomorrow is the first day of spring — not a moment too soon — and I hope it may bring some joy even into this house. Wattle Day was conceived as a way of celebrating patriotism and Australia, and it was first celebrated in 1910. It was also about recognising children. It was used as a day for children’s charities to collect donations but also to recognise the civic duties of children as well as to recognise and celebrate the beauties and wonders of our natural environment. Wattle Day has fallen out of favour, but there are still a few areas that celebrate it. I am pleased to see that there are a number of celebrations in Victoria, including in Ferntree Gully, Ringwood, Mitcham and Dandenong. But really it is not being celebrated that much.

Tomorrow we bring out the new $5 bill, which is also decorated with wattle. When we are looking at other national days, such as Australia Day or even Anzac Day, there is considerable and growing ambivalence about those days as days to recognise Australia. So I am calling on the government and the minister to consider recognising and bringing in new ways to celebrate Wattle Day in Victoria. As we know, wattle is the first plant to regenerate after fire, so I think it is a great way to celebrate the ability to renew and grow and also to celebrate our diversity. It is also the end of winter.

I am asking not only the minister but also all members to consider sharing Wattle Day with their constituents and wearing some wattle tomorrow. But I am specifically asking the minister to give
consideration — —

Mrs Peulich: With or without clothes?

Ms PATTEN: I will take up that interjection. It depends on the weather, Mrs Peulich.

I ask the minister to give consideration and thought to how we can foster the celebration of Wattle Day, particularly among young people in Victoria.

The Victorian Government acknowledges the significance of National Wattle Day, and the efforts of the volunteer-led Wattle Day Association in promoting and organising events across the country.

The Government also appreciates the efforts of community groups, councils and businesses who continue to organise community events that bring Victorians together.

The Government considers that National Wattle Day is a grassroots celebration which is best organised and celebrated by communities in their own way. 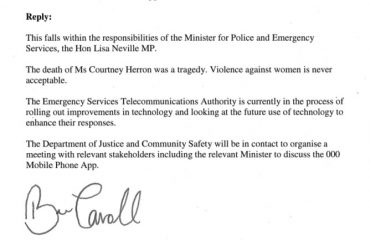