FIONA Patten is the closest thing to a rock star the Victorian Parliament has ever had.

She talks about drugs, has an open relationship with her partner and could charm anyone.

But despite her rock and roll style, the Australian Sex Party leader does not intend to be a one-hit wonder and her next move will surprise.

Last October, she appeared on the steps of the Victorian Parliament beaming from ear to ear next

to Health Minister Jill Hennessy. They were there to announce joint legislation to stop abortion protesters setting up picket lines within 150m of fertility clinics.

It was the promise Patten had campaigned on throughout the 2014 election.

And now less than 12 months after being voted in, she had bagged the biggest goal of her political career.

With her piercing blue eyes, slender build and addictive smile, the 51-year-old hardly looks like a fierce political animal, but it is clearly in her blood.

She was ready to hit the ground running after four attempts to be elected finally landed her in the Victorian Upper House.

And the groundswell of support she had created for abortion clinic buffer zones had became too big to ignore, forcing the State Government to join the campaign.

But the biggest battle was still to come.

Opponents filibustered the proposed legislation for more than 12 hours on the first night, with the chamber calling it quits at 4.30am.

The vote was finally called at 2am the following day.

The bill passed, and a sleepy-eyed Patten claimed her first victory in the Victorian Parliament.

However, if you ask the Legislative Council member, she maintains it’s not about winning. It’s about women.

“I am definitely a feminist,” Patten says. “We still have Eddie McGuire saying s— like he did (about sports journalist Caroline Wilson), we have still got 99 per cent of the sports commentators are men, and women’s sport has the pay differences.

“Twenty years ago we thought the glass ceiling was going for women. We saw more women graduating but it’s just not happening and we are going backwards in the boardrooms. We have got a bloody long way to go.” The 51-year-old hardly looks like a fierce political animal, but it is clearly in Fiona Patten’s blood. Picture: Jake Nowakowski

Patten has always been a liberal thinker but never sought the spotlight until her political awakenings began to show themselves in 1992, when she helped launch adult industry lobby group the EROS Association.

These days she moves seamlessly between meetings with Liberal and Labor Party colleagues and other minor parties.

Nearly everyone likes her — a rarity in the halls of power.

Patten still seems genuinely surprised she has made it as a politician, admitting it took her a long time to get there.

Born in Canberra in 1964, she remembers little of the nation’s capital after her family, including her Australian father, a member of the Royal Australian Navy, and her English mother, set sail for the United Kingdom.

Like most military families they moved around, with postings in England and the US over the next 14 years.

When Patten returned she was older, more worldly and had adopted a rich mix of accents, which people still trouble to place today.

She enrolled in industrial design at the University of Canberra after school, which morphed into fashion.

The vibrant scene inspired Patten and saw her exposed for the first time to the gay community and then sex workers.

She herself dabbled in the taboo trade.

And rubbing shoulders with the less popular side of society ignited her passion for the underdog.

“It’s just sex,” she has said more than once, outraged by policies including restrictions on pornography and retailers that she views as discrimination.

In the early ’90s she began regularly penning newspaper letters discussing legislation that unfairly targeted members of the sex industry — whom had become her colleagues and friends. Her writings caught the eye of fellow industry supporter and well-known local activist Robbie Swan.

Interested in meeting her, Swan asked mutual friends to bring her to a dinner party at his house in 1992.

Patten arrived with her signature bottle of white wine in hand and knocked Swan off his feet.

“She came over and there was no doubt we hit it off,” Swan says. “I was completely taken with her but she was a bit more reserved.’’

Undeterred, Swan persisted. They bonded over their activist backgrounds and within weeks became lovers.

The union led to the birth of the EROS Association — an adult lobby group that has banded together more than 200 members, including adult retailers and tobacconists.

To this day they still run the organisation and continue to adore each other, despite living more than 1000km apart.

Patten lives in Melbourne and Swan in Canberra. The pair have not lived together properly for years but remain content in their unconventional open relationship, which has lasted more than two decades.

They speak on the phone at least 10 times a day and visits are regular. The next issue in Patten’s sights is voluntary euthanasia.

Swan, with his white hair and beard, can often be spotted sitting in the State Parliament gallery watching Patten proudly whenever he comes to Victoria.

The biggest misconception about Patten is that she is not a family woman. After all, it’s hard for people to imagine the leader of the Australian Sex Party to be part of a loving partnership.

However, Patten is much more than meets the eye and even helped raise two daughters from Swan’s previous marriage.

“I have a really good relationship with both the girls,’’ Patten says. “I am not their mum, I am their dad’s partner and I will support them in every way I can.”

Patten helped raise the girls for 20 years and now is a grandmother to the next generation. But she maintains weddings bells will never be on the cards.

“I just don’t feel the need. I had a really great birthday party a few years ago that probably cost

The Australian Sex Party is effectively the brainchild of the pair, hatched over wine in 2008 and launched less than a year later.

“We had supported other political parties, financially and in other ways, but that hadn’t got us anywhere either,’’ Patten says.

“So once we thought about setting up a political party it was in one day and we thought, ‘OK we will’. And then we worked out what we would call it, what our policies would be.

“The name came out of a round table discussion with the EROS members. No one was particularly comfortable with the name back then. It was risky but we couldn’t think of a better one.’’

Once the idea was born there was no question about who should be the face of it. With her non-combative style and fierce intellect, Patten was a clear candidate.

“She finds it extremely difficult to say something she doesn’t believe in and people get that,’’ Swan says.

“She has a lot of street smarts from her father but her mother has given her the airs and graces of society.’’

It is undeniable that Patten has charm but also an innate political mind.

When she entered the Victorian Parliament there were many jokes about the “sexy party” in the members’ dining room. Patten seemed oblivious to the ribbing and set about making a name for herself, which has earned the high praise of well-respected Liberal Speaker Bruce Atkinson.

“There would be people who have some concern about the name of the party but the reality is she is a very progressive character and an articulate woman.

“I think in some ways the name is a bit of a hindrance to her to be an Australian Sex Party candidate.’’

Renaming the party has always been discussed, but Patten thinks it is not likely to happen.

“Everyone still tells me to change it,” Patten says.

“I just don’t know what else we would call it.’’

One of her favourite choices is the Surprise Party, recommended by Swan.

“I don’t think we will change it. People used to laugh, but they don’t laugh any more.

“Really senior women say, ‘I voted for you. I think your principles and your policies are fantastic.’ We also have a lot more men.’’

But when the results from the July federal election began to roll in, they were a brutal blow for the Sex Party.

The Victorian senate candidates were usurped by the polarising Pauline Hanson campaign and the “Human Headline”, DerrynHinch.

“It was such a depressing result,” Patten says.

“Not just for us but on so many levels. Who would have imagined that Pauline Hanson would get the fifth highest vote in Victoria?

“I don’t know what it is, maybe it is the fact that middle-aged men are just feeling completely out of the equation. Patten was determined to make a name for herself in politics. Picture: Jake Nowakowski

Moving on from the election, Patten is turning her mind back to Victorian issues. Surprisingly, the focus in the lead-up to the 2018 election will be elderly Australians.

into end of life choices.

Hearing stories about horrific suicides by sick and dying elderly patients affected Patten, who knows changing the law will be an uphill battle.

“I hope (the State Government) will have the courage to accept the modest and compassionate recommendations, otherwise it will be a private member’s bill,’’ she warns.

“It would be absolutely brilliant and it would be along the lines of community opinion.’’

Patten jokes that in the next couple of years she could be standing on the front of the Victorian Parliament steps again, announcing joint legislation on assisted dying.

Some people may believe this as a hollow threat but Patten has already proved her political grit with her abortion clinic buffer zone legislation.

Retirement homes and treatment of elderly will also be a key areas Patten wants to investigate, warning the industry is “unregulated’’ and the treatment of some people truly shocking.

The subjects seem a world away from Patten’s beginnings as a sex industry activist, but good policies are what she wants to be known for.

However, sex, drugs and rock and roll are never far from her plan. Patten successfully introduced Australia’s first inquiry

into pharmaceutical and illicit drugs, which will begin later this year.

The panel will investigate everything drug-related, which Patten hopes will see lawmakers move away from heavy policing at music festivals and focus on helping people deal with health risks.

“This is one of the major reasons I sought election,’’ she says. “We need to change our draconian drugs laws.

“Currently we spend hundreds of millions of dollars on locking people up for drugs offences and turning people away from treatment facilities.

It’s time we redefined the prism through which we look at drugs in society.” 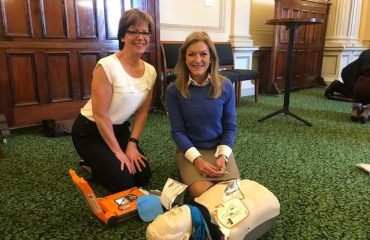