Ms PATTEN (Northern Metropolitan) (12:39): My question is for the Minister for Health and concerns the closure of the catering company I Cook Foods. Dr Brett Sutton, who was the acting chief health officer at the time and ordered the closure, has stated that he was satisfied from the report of an authorised officer of the department’s food safety unit that the food being prepared, sold or otherwise handled at the premises was unsafe. However, I Cook Foods was never given a copy of that report. I understand that FOI requests were refused in relation to obtaining these documents and that on 17 February the Supreme Court made an order for the report to be provided to the operators of I Cook Foods. My question is: can the minister please confirm that she herself has viewed and read the report and that she will table the document in Parliament?

Ms MIKAKOS (Northern Metropolitan—Minister for Health, Minister for Ambulance Services) (12:40): Thank you for that question. These are matters that I have spoken about in the house before, and I do refer the member to what I have said about these matters before. This is a very serious matter. We did have an elderly woman, an 86-year-old woman, who died from listeriosis, and what was found was that the source of the listeria was linked to a food manufacturer, I Cook Foods. So this is why we have made no apology for the department taking the action that it took that was necessary to keep patients and vulnerable Victorians safe from the threat of deadly infectious diseases. I do point out to the member—I am not sure if she is aware—that the matter is now in court. I understand that the company that she has referred to has commenced litigation in the Supreme Court. As part of that process there is a process of discovery, by which documents get provided to other parties. I think it is appropriate that those processes are allowed to follow through in accordance with the normal legal processes, rather than any member seeking to insert themselves into the litigation.

Ms PATTEN (Northern Metropolitan) (12:42): Thank you, Minister. Really the question was specifically about the report that was relied upon to close down I Cook Foods. The court has ordered that that report be provided to the owners of I Cook Foods. They have not received it. There is some question as to whether it even exists. So I suppose, as a supplementary question, can you tell me: does the report that you and your department relied on for the closure of I Cook Foods actually exist?

Ms MIKAKOS (Northern Metropolitan—Minister for Health, Minister for Ambulance Services) (12:43): The advice that I have is that I Cook Foods made an application for preliminary discovery for documents of the Department of Health and Human Services in the Supreme Court. The department had offered to provide the relevant documents to I Cook Foods on a confidential basis previously, but that offer was rejected. The Supreme Court then decided that I Cook Foods should be given the documents subject to confidentiality provisions. It is important with public health incidents that there is direct and robust communication between department employees, relevant authorities and authorised officers. It is important now that these confidentiality provisions ensure the continued reporting of public health risks and informed decisionmaking by the department so that appropriate action can be taken to limit the impact on the community of future public health incidents. So I do make the point to the member again that there is a legal process now that is underway, and it is appropriate that we enable that to roll out without any member seeking to interfere in that process. Ms Patten: On a point of order, President, this is not about the legal process. In fact the court actually ordered the report to be provided to I Cook Foods. That has not occurred. Freedom of information requests have been refused. So my simple question was: does the report actually exist? The minister failed to respond to that.

The PRESIDENT: Ms Patten, I will take your point of order into account when I am asking for written responses. 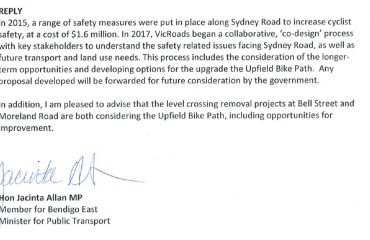