Ms PATTEN (Northern Metropolitan) (12:17): My question is for the Minister for Local Government. At the beginning of this month you announced the Gender Equality Advisory Committee, which among other things will drive the implementation of the Australian-first Gender Equality Act 2020 across local government. I think you spoke more about it, if I am right, in your ministers statement this week. Local government is a massive employer of women, but many of the services that they provide are contracted on a short-term basis. This leads to job insecurity and knowledge loss through job churn. Can the minister explain what the rationale is for delivering these essential services on short-term contracts?

Mr LEANE (Eastern Metropolitan—Minister for Local Government, Minister for Suburban Development, Minister for Veterans) (12:18): I thank Ms Patten for her question. It is a very good
question, a very interesting question. I will get to the crux of her question, but can I start by saying that local government is its own tier of government through the Victorian state constitution, and they have the right to set their own budgets and their own priorities in line with, I would hope, the community they represent’s priorities.

On the gender equality local government committee, my original thoughts around that are that we do have a goal set to get to a certain point where, particularly with elected representatives, there is a gender balance. I think I have crowed a few times about how we were quite happy with the last election going towards that, but it has not got to the goal we had set. In saying that, I think that is important work, but I think there is a lot more this group can do as far as assisting and advising how we achieve the objectives in the act go, so I am pretty keen for this group to do work in this area. One of the areas that I was hoping to work in was a bit of a culture change as well as far as attitudes go in some of the sector, not all of the sector.

When you read the monitor reports, which brought legislation to this house to remove some councillors in recent times and appoint administrators, it is quite horrifying, actually, some of the behaviour towards staff. Staff is an area that I think we need to get an awareness of, and that is why this group will have high-level members of staff but also members of staff that may not be in the high ranks of management, to get that feedback. As far as job security as far as contracting out goes, as I said, councils have the right, outside of whatever I think, to set their own budgets and how they go about it and how they go about their contracting, but I think it is an area that I am more than happy to consider.

Mr LEANE: I know it might be an outrage that there are more women than men in some workplaces for some people. I mean, that might be a shock. Get the smelling salts out. So the answer to your question is that I cannot give you a definitive answer, but I am more than happy to look at it and work towards a better outcome for those workers that you are concerned about.

Ms PATTEN (Northern Metropolitan) (12:21): Thank you, Minister, and in some ways you have almost affirmed the question I was going to ask as supplementary. The Queensland government has acknowledged the short-sightedness of short-term contracts in regard to local government and now issues five-year contracts, which has been a huge success in ensuring the job security of many women in the sector. Has the minister spoken to his interstate counterparts to ascertain how Queensland implemented longer term contracts in the local government sector?

Mr LEANE (Eastern Metropolitan—Minister for Local Government, Minister for Suburban Development, Minister for Veterans) (12:21): The answer to the supplementary is no, but there is a ‘but’. With any jurisdiction that is doing anything better than we may be doing in this sector I am more than happy to have a conversation. I think that with COVID there is a bit of a rethink about the way people should be employed—this was a sector where people were a bit caught out, I think, in their employment arrangements and their contracting arrangements—and about making sure there are ways to look after really good people that are doing really good work. I think this is a sector that was a bit caught out in that area, so I am more than happy to speak to, I think it is, the Deputy Premier in Queensland that is now the local government minister, and what a ripping bloke he is. His attitude towards the federal government is just gold, so thank you for inviting me to have a chat to him. 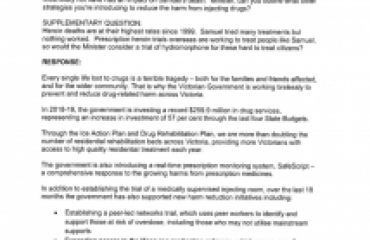