Ms PATTEN (Northern Metropolitan) (12:04): My question today is for the Attorney-General. The Victorian Aboriginal Legal Service stated in a recent budget submission that without adequate funding they may have to withdraw from the Victorian Aboriginal Justice Agreement and cut services, so it was disappointing to see that, despite VALS having developed their Aboriginal justice hub model in response to the Victorian government’s own priorities for integrated and tailored local services, the funding announced was woefully inadequate. The funding ask was for just over $26 million. To put that in perspective, that is equivalent to the cost of keeping 224 people in prison in Victoria each year. Given many will not be able to access culturally appropriate legal services, does the government expect the incarceration rates to increase amongst Aboriginal Victorians?

Ms SYMES (Northern Victoria—Leader of the Government, Attorney-General, Minister for Resources) (12:05): I thank Ms Patten for her question. I draw to the attention of the house that this year’s budget delivered a record $448 million of investment for Aboriginal people and statewide healing, including $98 million for Victoria’s commitments for self-determination, truth and treaty alone. This is a fantastic outcome from a government that is committed to righting the wrongs of the past and working with our Aboriginal communities and advocates in self-determination practices for the betterment of our First Nations people.

We are certainly keen to work with VALS and continue to do so to help them start their place-based delivery model. There was $2 million of extra funding for a pilot program to establish the first of their new centres, which will lay the groundwork for the evidence of future expansion. On top of that $2.16 million there was further one-off funding in last year’s budget for steps for planning and implementing the model—so planning, implementing, pilot—and we continue to work with them on the expansion to other locations, as is their aim. We are certainly keen to help support that.

Ms PATTEN (Northern Metropolitan) (12:06): Thank you, Minister. It certainly seems, from what I am gathering from this, that you are still keen for them to deliver a place-based model, just not now. But had they been funded, they would have been able to open in Mildura, Warrnambool, Bendigo, Wodonga and the Latrobe Valley, with satellite offices in Horsham, Geelong, Shepparton, Bairnsdale and Frankston. From my meetings with them, they certainly felt that they were ready to go; they did not need to continue with the pilot. So, by supplementary, I ask: will you meet with the Victorian Aboriginal Legal Service to assess how they can continue to participate in the Aboriginal justice agreement and find a new path forward to sustain the funding that they need?

Ms SYMES (Northern Victoria—Leader of the Government, Attorney-General, Minister for Resources) (12:07): Thank you, Ms Patten. The answer would be yes. We have had regular, very intensive engagement with VALS and other organisations that provide justice services particularly to Aboriginal people. I met with Djirra last week. And in relation to VALS, they have had regular contact with my office, and there has been correspondence that has certainly encouraged them to work with us on finding pathways for sustainable funding models for some of the things that they want to do. A pilot is a great way to demonstrate your project and how it can be expanded to further locations. But just to correct your supplementary, there is funding of $2 million in this year’s budget which can create a regional hub and then can be expanded to other locations. That would be one—that is correct—but that is also a great pathway to further expansions. 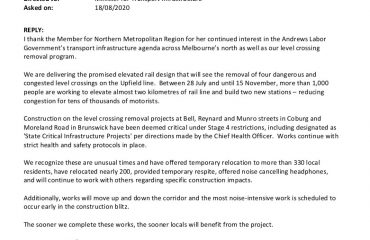