Ms PATTEN (Northern Metropolitan) (12:30): My question is for the Attorney-General. We have recently had a case under the voluntary assisted dying legislation where a New Zealand woman who had been living in Victoria for 20-plus years and was a nurse here was denied access to voluntary assisted dying. The reason given was that she was not a permanent resident. Now, when we went back to look at the act itself there was no definition. When we went to look at the acts interpretation act, there is no definition for ‘permanent resident’. So my question is: is there any other legislation in Victoria where a person born in New Zealand who had lived here for 20 years would not be considered a permanent resident?

Ms SYMES (Northern Victoria—Leader of the Government, Attorney-General, Minister for Resources) (12:31): I thank Ms Patten for her question. It is a cracking question. I do not know the answer. I am going to seek advice on that, because I am aware of that case and it did strike me as potentially unfair. I do want to seek some further advice on that and come back to you.

Ms PATTEN (Northern Metropolitan) (12:31): Thank you, Minister. You and I were both on that inquiry, and I do not think that was ever the expectation of the committee or even of this house that we would exclude people like that. So by way of supplementary: will you consider including a definition in the acts interpretation act of ‘permanent resident’ so that this issue is not raised again?

Ms SYMES (Northern Victoria—Leader of the Government, Attorney-General, Minister for Resources) (12:32): Ms Patten, I cannot give any guarantees in relation to that, because I guess what I am worried about is commonwealth laws and how they apply, because I think that the definition of ‘permanent residency’ would certainly be a matter for federal government, not state government. But where it interacts with our laws I think that this example has certainly shown us that we should seek some clarification. And I will just inform you that that specific case that was raised with you and also with me is under consideration by the Department of Health. 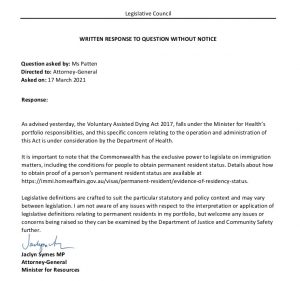