Ms PATTEN (Northern Metropolitan) — My adjournment matter is for the Minister for Public Transport, and it is in consideration of the ongoing discussion about an airport link. I noticed in the print media in June that the federal government said that they might ‘go it alone’ on a Melbourne Airport rail link, and this appears to be a bit of stand-off between the state and federal governments over infrastructure spending in Victoria.

Reportedly the state government in some ways in playing down the project’s urgency has pointed to advice from Infrastructure Victoria that says the project would be needed in the next 15 to 30 years and would cost $5 billion, but in making my adjournment contribution today I would like to invite the government to consider this project in a different light — not as a single line between Melbourne and Tullamarine but as a gateway to regional Victoria, and I refer to the Rail Futures Institute intercity plan.

The Rail Futures Institute plan would create a ‘state of cities’ in Victoria linked by fast rail to Melbourne via a major hub at Melbourne Airport. This key driver would incentivise the population rebalancing that we are going to need as Melbourne grows and we start to use those regional areas and build our regional cities. This would significantly reduce travel distances and enhance opportunities for those regional cities as far as living, jobs and improved housing affordability.

The plan provides a blueprint for the next 30 years of regional rail development to support projected population growth, commencing with the construction of a Melbourne Airport link. This would provide enhanced business and travel opportunities for Bendigo residents via a Bendigo-Castlemaine-Melbourne Airport-Melbourne CBD fast rail. I call on the minister to examine the Rail Futures Institute plan and look at reprioritising this infrastructure spending in what I consider is not just an airport link but it would provide a hub for improving our regional connections.

The Andrews Labor Government and Federal Government are working together to develop an Airport Rail Link Plan. As part of this plan, we will assess the best route for an airport rail link, how much it would cost, and how best to fund and deliver it.

The Andrews Labor Government is currently delivering the Metro Tunnel, which will create the capacity to run more trains into and out of Melbourne. This project is a vital next step towards future projects, such as an Airport Rail Link, and is also important for supporting population growth. It will enable more trains to operate more trains across Melbourne.

In the interim, we will continue to improve and promote the existing SkyBus service to the airport. SkyBus offers an express service to and from Southern Cross Station, departing every 10 minutes during the day. In addition, SkyBus is improving capacity by up to 33 per cent by operating double-decker buses on some services. 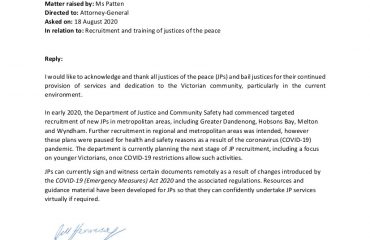