Incorporated pursuant to order of Council of 7 September:

My adjournment matter is for the Minister for Agriculture and relates to hemp.

The National Farmers Federation has set a target of $100 billion farmgate production by 2030. The current production level is just above $60 billion.

The director of CSIRO agriculture and food, John Manners, has said:

We need to create an innovation ecosystem in Australia that can take the excellent science that our public institutions do and take it further down the commercialisation track, making it more accessible to further commercialisation by both new and established players.

Industrial hemp offers an opportunity to play an integral part in these aspirations. It can significantly advance the Victorian economy, but the industry is severely inhibited just in the way it is regulated.

Hemp is not cannabis, yet the current status of industrial hemp in Victoria is that it is being treated in the same way as a drug within the Drugs, Poisons and Controlled Substances Act.

Logically, not being a drug, it should be treated in the same way as wheat, barley or any other crop.

Just like a mushroom grower is not required to be licensed despite the fact that there are hallucinogenic or psychotropic mushroom varieties, hemp production does not require policing because it has a psychoactive cousin.

A more productive approach would be to identify low-THC cannabis varieties for Victorian conditions and schedule those as exceptions to the definitions within the Drugs, Poisons and Controlled Substances Act. This approach has been used in Canada for many years.

So the action I seek is that the minister commission sufficient research to identify and list suitable low-THC varieties and harmonise hemp cultivation with other Australians jurisdictions. 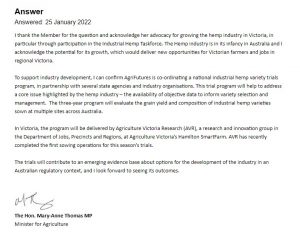 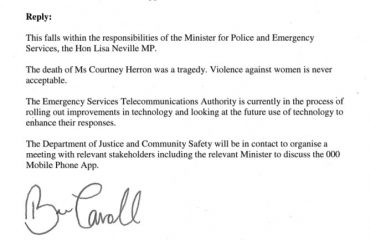