Ms PATTEN (Northern Metropolitan) (17:35): My adjournment matter is for the Minister for Transport Infrastructure, and the action I seek is for the minister to publish or, if she has not already done so, develop a transport plan. It is a requirement of the Transport Integration Act 2010 for the minister to prepare such a plan, but it appears since 2010 that has never, ever happened. Without this plan we do see mistakes being made or certainly our planning intentions for transport being very unclear. Land use can be ill-timed, haphazard or just miss opportunities. We need to break this paradigm of reactive infrastructure spending. If we could have a plan we could be looking forward, and I think if nothing else showed us that, it was the debate that we had yesterday around the future of electric vehicles and the future of transitioning to zero-emission vehicles. It is really difficult when you cannot put that into a coordinated plan.

We have a Melbourne transport plan that was developed in 2017, but we do not have a statewide one, and we need a long-term transport plan. It is something that I would hope that we could all be involved in at one stage, but at the moment it is up to the minister to develop this plan. It has not been done. I acknowledge that no transport minister since 2010 has developed this plan, but now is the time, particularly as we are seeing things like transitioning to zero emissions, when we are seeing the desire from our community for greater active transport, when we are seeing that Melbourne has a plan but we cannot integrate that into a Victoria-wide plan. We saw this in Infrastructure Victoria’s 30-year strategy. Please, government, can we have a transport plan? As I said, the action I seek is for the minister to develop and publish long-term transport plans for Victoria as required under the act.

I thank the Member for Northern Metropolitan Region for her question.

The Andrews Labor Government, through our $80 Billion Big Build program is currently delivering over 165 major transport projects right across our State.

These projects include the Metro Tunnel, Melbourne Airport Rail, Geelong Fast Rail, North East Link, West Gate Tunnel, the removal of 75 level crossings, the Western Rail Plan, the duplication of the Cranbourne and Hurstbridge lines, the extension of the Pakenham line and upgrades to every regional rail line in Victoria.

Projects such as the Mernda Rail Extension, the Cranbourne Duplication, the Pakenham line extension and the Western Rail Plan are all coordinated with land use objectives to improve rail capacity into growth areas.

In addition to all of this, there is the Suburban Rail Loop (SRL) project, which is much more than a public transport system but a precinct project that will transform Melbourne’s middle suburbs and deliver significant urban renewal outcomes. The Government’s Big Build and the SRL are central to the Government’s plans to respond to the challenges and opportunities presented by Victoria’s population growth.

I trust this information is of assistance to the Member. 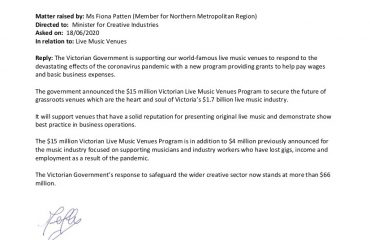