Ms PATTEN (Northern Metropolitan) (21:24): (1582) My adjournment matter is for the Minister for Roads and Road Safety and relates to medicinal cannabis and driving. The medicinal cannabis driving task force presented a report, and from that I would hope that Victoria is edging slowly, slowly closer towards reform in this area. That reform will reduce the stigma of being a medicinal cannabis patient, and it will stop driving chronic pain sufferers and other patients back towards other dangerous and addictive medications.

And I do not know about other members in this chamber, but I am regularly contacted by people who have been stopped and are now facing licence loss, job loss and business loss for taking a prescription medication that they were prescribed. We are the only country that does this. Study after study has demonstrated that it will not affect our road safety, quite unlike forcing many of these people back onto opioids and benzodiazepines.

Recently I was contacted by a patient who had taken his prescription medication almost 24 hours before he was stopped by the police. They tested him with a breathalyser test; he tested negative. He tested positive for traces of THC. He is a motor mechanic. He is the sole provider for his family, he is the only licence-holder in his family, he has a special needs son and he stands to lose his licence and his job for taking the medicine that a doctor prescribed to him. He suffers from PTSD, depression and insomnia. This got him back to work—this medicine—but because he had minute residual levels of THC he is facing the loss of his job, the loss of his licence. He was not under the influence of this medication.

This cannot be in the public interest, so the action that I am seeking tonight is that the minister provides me with road crash statistics from the last five years where the at-fault driver was a person who had been prescribed medicinal cannabis.

As you are aware, in late 2020, the Victorian Government established the Medicinal Cannabis and Safe Driving Working Group to consider the development of a viable policy which carefully balances the rights of medicinal cannabis patients and the safety of all Victorian road users.  The report, which was released in July 2021, outlined the current roadside drug testing program in Victoria and investigated whether the particular circumstances of medicinal cannabis patients might result in an alternative approach to drug driving regulations.

In Victoria, a roadside drug test consists of an initial roadside saliva sample, which, if positive, is sent to the Victorian Institute of Forensic Medicine (VIFM) for laboratory confirmation. VIFM does not issue a finding of a positive drug test below their laboratory cut-off threshold. This process acts to ensure only saliva samples resulting from recent use, which are associated with impairment, results in an infringement.

VIFM has advised that existing THC saliva-based tests in Victoria do not detect THC from consumption days or weeks prior, but only indicate the presence of THC in mouth residue from recent consumption.

There is currently no scientific consensus on what an impairment level of THC would be, and there is no current roadside testing device that would allow for roadside impairment testing. There is, however, consistent scientific evidence that shows that recently consumed THC increases crash risk. This is outlined in the report.

The government is still considering the findings of the report and is currently undertaking a number of research projects to gain a better understanding of medicinal cannabis and driving issues in Victoria. This research, which is set out in the report, includes:

The government will continue to take an evidence-informed policy approach to any future decisions about medicinal cannabis use and driving. 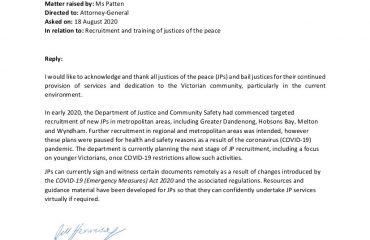