Mr Herbert — That’s not true. Eltham College has a campus in the CBD.

Ms Patten — Eltham? I do not think we would consider Eltham to be in the Melbourne CBD. However, there is a great lack of schools.
When the Melbourne CBD was that hole in the doughnut and we looked at filling it I do not think that any of us imagined, and certainly the planners did not, that families would be moving into the CBD — and families are. Growing numbers are moving into the CBD, and there are no schools for those families. We expected empty-nesters and we expected double-income-no-kids and — fancy that! — something happened on a cold winter’s night and those double-income-no-kids had kids, and those kids are growing. We have a playgroup but we do not have a primary school and we do not have a high school, and some of those kids are reaching high-school age.

I spoke to the parents today. They are taking their kids out to Albert Park, they are taking their kids to Kensington and they are taking their kids to Carlton. But those schools are overcrowded already. Albert Park, for example, is a school that was built for 240 kids; it is now taking its 550th child. So we need to do something urgently. We cannot keep waiting, because while it is a young demographic now those kids are going to be in high school in less than four years and there will be no high schools to accommodate them.
If we look at other cities, like Singapore and Vancouver, all of them are dealing with inner-city living, and I think we should be doing that. I call on the minister to examine how we can alleviate the overcrowding in those inner-city schools and also start planning for the future and building new schools in the inner CBD.

I am informed as follows:

The 2016-17 Budget delivers the largest ever investment in Victorian school infrastructure, allocating $1.1 billion to build, upgrade and maintain schools across the state. To deal with this major new investment, combined with our investment in the 15/16 budget which was also historic, $730 million, we have created a new Victorian School Building Authority.

Victoria is experiencing unprecedented population which is leading to overcrowding at existing schools. It is anticipated that the total school age population (5-17) in Victoria will increase by over 90 000 student enrolments between 2016 and 2021.

Many schools across Victoria are facing enrolment pressures. This pressure is being experienced in the regions, across our growth areas, and as you are well aware, across the inner city.

The latest budget including funding to buy land, build or complete 23 new schools. This additional funding means that 42 new school projects are now in the pipeline which will come online in the next few years.

The Government is delivering on its commitment to undertake a school provision review in Docklands and the immediate surrounding suburbs of North Melbourne, West Melbourne, Melbourne, Parkville and Flemington. Stage One of the school provision review in Docklands is now complete. Stage One of the review found that more capacity will be needed by 2031 to meet the expected increase in demand for Government primary and secondary school places.

Stage Two of the review is underway and will look at options to better meet the needs of the Docklands residents. This will involve further consultation with the community and key stakeholders. This review will contribute to our decision making on school provision across the inner city into the future. 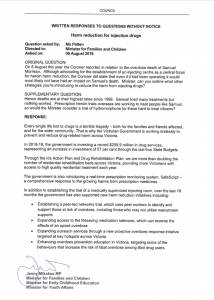