Ms PATTEN (Northern Metropolitan) (12:12): My question is for Minister Leane, as veterans minister. The RSL was founded during World War I to help care for returning veterans. A hundred years later these clubs are multimillion-dollar organisations.

In Victoria a large proportion of the RSL’s annual income comes from poker machines. To be precise, RSL poker machines turned over $260 million in revenue, but less than 4 per cent of that revenue, $9.8 million, went back into the community and veteran welfare.

There has been a concerted push by some younger members within the RSL—and I suspect they have corresponded with you—to get pokies out of RSL clubs, arguing that it is not worth the return. Will the minister work with veterans organisations to achieve this outcome?

Mr LEANE (Eastern Metropolitan—Minister for Local Government, Minister for Suburban Development, Minister for Veterans) (12:13): I thank Ms Patten for her question, and I suppose the initial answer is the finances of the business of the RSL is up to them to administer.

I think gaming machines have been an element of some branches—not all branches, only some branches—and I do take into account that there would be different opinions within the RSL among vets that are maybe not even members of the RSL around how those finances may be collected or achieved.

Ms Patten, as you said, I have had people come to me with delegations around the worth or not of being in this particular area. Once again I think the chamber and the rest of the community would actually be quite horrified if a minister of the state government was interfering with the RSL.

In the RSL everything moves on and everything changes. This may be a change; it may not. I understand that they have got their AGM coming up soon, and I am sure there will be a debate around that. Once again that is not for me to put my two bob in.

The DVA’s budget last year was $11 billion, and we have got Victorian ESOs in a place where they feel that this is an area that they must completely concentrate on, when maybe—maybe—we should give them a break.

Ms PATTEN (Northern Metropolitan) (12:16): I do take your point on the federal matters, and I take your point, Minister, that it is possibly not within your functions to talk to them about this.

But when we look at how RSLs now owe the government $68 million in poker machine licence fees—and we know that the RSLs are going into debt all over the place—I am asking: would the minister advocate and investigate if these fees could be reduced or abolished?

Mr LEANE (Eastern Metropolitan—Minister for Local Government, Minister for Suburban Development, Minister for Veterans) (12:17): Ms Patten, you are asking me a question that is outside my portfolio, but I am always happy to advocate for welfare of veterans in whatever form that may take.

I understand that during COVID for some of these RSL branches, to no fault of the members at all, COVID did affect these branches because they were more the broad brush of gambling venues, so they could not operate.

I did actually reach out to the RSL via my adviser to see if we can speak to local governments—if there are halls where people could gather and do that core business that you spoke about because of them unfortunately not being able to use the venues that they have been used to using over recent years.

So I welcome all questions around veterans affairs, and I thank Ms Patten and other members who in recent weeks have actually brought this to attention. I have got to say, people in the veterans community and family are noticing and actually appreciating it.

Justification for children in adult prison 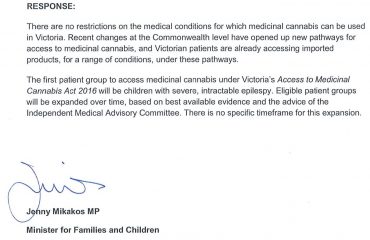 Medicinal Cannabis not available to all. Why not?