Ms PATTEN (Northern Metropolitan) (12:02): My question today is for the Minister for Veterans. In what is the final step towards medical approval, a major study in the US has shown that MDMA brings relief to those suffering from severe post-traumatic stress disorder.

Those who received MDMA in a test group experienced a significantly greater reduction in the severity of their symptoms. Two months after treatment 67 per cent of the participants in the group no longer qualified for a diagnosis of PTSD, compared to 32 per cent in the placebo group.

We know about 17 per cent of military veterans suffer PTSD within the first four years of discharge. It is unacceptably high, and new treatments such as MDMA could have real benefit to them. Could you commit today to working with the Minister for Health to ensure that any barriers to treatment can be overcome so that PTSD treatment that includes drugs such as MDMA can be used?

I think I will answer her question up-front. Ms Patten, I can commit to getting more understanding around this particular issue. I freely admit I am not an expert in MDMA, but I think that the point you are making is that we need to look into it and research it, so I commit to getting to that point, and I also commit to having a conversation with the Minister for Health. I am not
too sure if I can commit to alleviating the barriers straightaway, but I think that it is a really important point that Ms Patten is making and I commit to doing the work.

I was recently at Phoenix Australia, in Heidelberg, who are doing some amazing work in this area and have created some software around identifying people that have got PTSD through some visual prompts. It is amazing work that they are doing, and I was actually privileged to see what they are doing. I am really pleased that our government is supporting them in their work.

I cannot disagree with the statistics Ms Patten has mentioned. It is an area that we need to do more work in, and I think there are some areas that as a state government we can probably do more in. I am not saying that veterans would have PTSD, but I think there might be a lot of cases of depression returning from different combat zones, from a number of conversations I have had with some more contemporary veterans.

I had a conversation with a veteran in Gippsland who spoke to me about there being good days and bad days. I had a conversation with a veteran in Ballarat—an amazing story. He was in a dark place and decided one day he would like to get into beekeeping. He got a hive and joined a group, and it broke him out of his dark place and he worked his way back into society. So there is a lot of work we can do.

As I said, I will commit to doing the research and getting my head around this and talking to the Minister for Health.

Ms PATTEN (Northern Metropolitan) (12:05): Thank you, Minister, for that commitment, and I commend you on the work that you are doing with veterans. Certainly seeing you speak at the rally the other week was impressive. A leading Victorian psychiatrist specialising in trauma, Dr Eli Kotler, recently received approval from the TGA to use MDMA as part of psychotherapy for a patient in Victoria suffering from severe PTSD. He got it under the TGA special access scheme.

Having received TGA approval, Dr Kotler then applied to the Secretary of the Victorian Department of Health under section 33A of the act to permit to treat this patient in Victoria with MDMA-assisted psychotherapy, but he was refused. This is an example of the red tape that we do need to cut here.

So I am just asking, by way of supplementary: will you address Dr Kotler’s case with the health minister when you bring the matter of PTSD MDMA treatment up with him?

Mr LEANE (Eastern Metropolitan—Minister for Local Government, Minister for Suburban Development, Minister for Veterans) (12:07): Once again the answer is yes. I will endeavour to get
my head around this particular issue and around Dr Kotler’s issue as well.

This is an area where it is far past my expertise, and I am one in this chamber to actually admit when something is beyond that, but I thank Ms Patten again for her question.

Also, as far as the medical research goes, I want to thank Minister Pulford, who has just indicated to me that in her responsibility in that area she is happy to do some work as well, particularly around the MDMA. 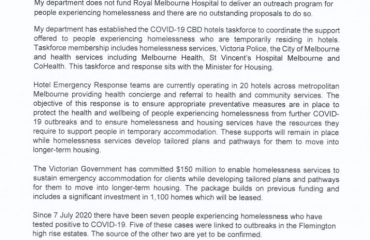 Why no driver impairment testing in Vic?