My adjournment matter today is for the Minister for Crime Prevention, and the action I am seeking is a meeting with the minister, me and the Emergency Services Telecommunications Authority.

This is about a wonderful, innovative, new piece of technology that has recently been developed by Magistrate John O’Callaghan. He calls it the Triple 0 app; I would like to call it the O’Callaghan plan.

Essentially it is a mobile phone app that when activated will allow video and audio from your phone to go straight to 000. In other words, virtually every Victorian will have a CCTV camera in their pocket or handbag. You can imagine the possibilities of that.

If someone is being pursued or if someone at a fire or if someone is at an emergency, they can activate this app and the 000 operators will have visual access to the incident as well as being able to speak to the people there and be able to triangulate and pinpoint the person’s location.

There would also be the possibility of a blue light coming on so if a woman was being pursued, she could put the app on. This blue light would flash and you would have the operator from 000 saying, ‘Mate, back off. I know who you are. I’ve got a photo of you’.

It would actually act as a great deterrent to crime. In a week when many of us are thinking about the tragic death of Courtney Herron, we owe it to her to think of ways that we can prevent crime and we can prevent these tragedies.

As I say, the action I seek and I hope will happen is for the crime prevention minister to meet with me and the Emergency Services Telecommunications Authority to see how we can really move forward with this very innovative idea from Magistrate O’Callaghan. 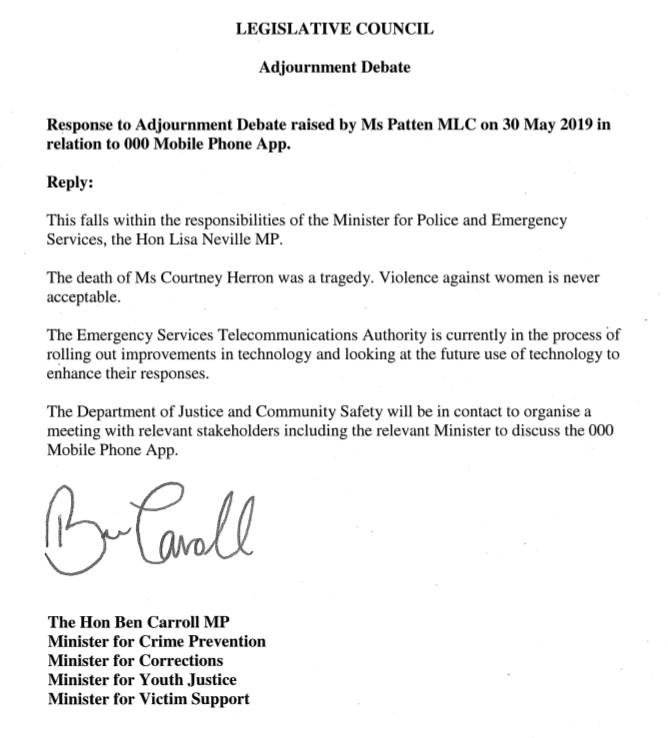