Ms PATTEN (Northern Metropolitan) (18:30): My adjournment matter is for the Minister for Mental Health, Mr Foley, and the action I am seeking is for the minister to get in touch with the UK Parliament’s ‘minister for loneliness’ and consider developing a Victorian strategy for tackling loneliness. I have to say last week—in fact probably just the other day—I was in London and I met with the inaugural minister, Tracey Crouch, and spoke to her about how they had developed this strategy and what the basis was for it.

Loneliness really is a significant issue, not just in the UK but here as well. In fact Harvard University equates the health impact of loneliness with smoking 15 cigarettes a day—so a half-a-pack-a-day smoker. It is also linked to obesity. We know that people who are lonely turn up at emergency departments far more often than anyone else. So they have developed a strategy called A Connected Society: A Strategy for Tackling Loneliness—Laying the Foundations for Change, and it really is a brilliant cross-government strategy.

We know that society is changing and we live and work in very different ways. Employment practices have changed. We are living longer but not necessarily better. We may be working from long distances, we may have to move for our work, so we are finding that social isolation is an emerging issue, and in the UK they say somewhere around 18 per cent of people in the UK experience loneliness at some stage of their life, and I think the figure would be very similar in Victoria. As I mentioned, it is linked to obesity, coronary heart disease and stroke, and it is a precursor to depression, cognitive decline and an increase in Alzheimer’s, so it is a significant issue.

I think this is a really good idea and I think it works alongside the Royal Commission into Victoria’s Mental Health System. We do not need to wait until that commission is finished. So, as I said, I would please ask the minister to reach out to Minister Davies in the UK and also look to develop a strategy for loneliness in Victoria. 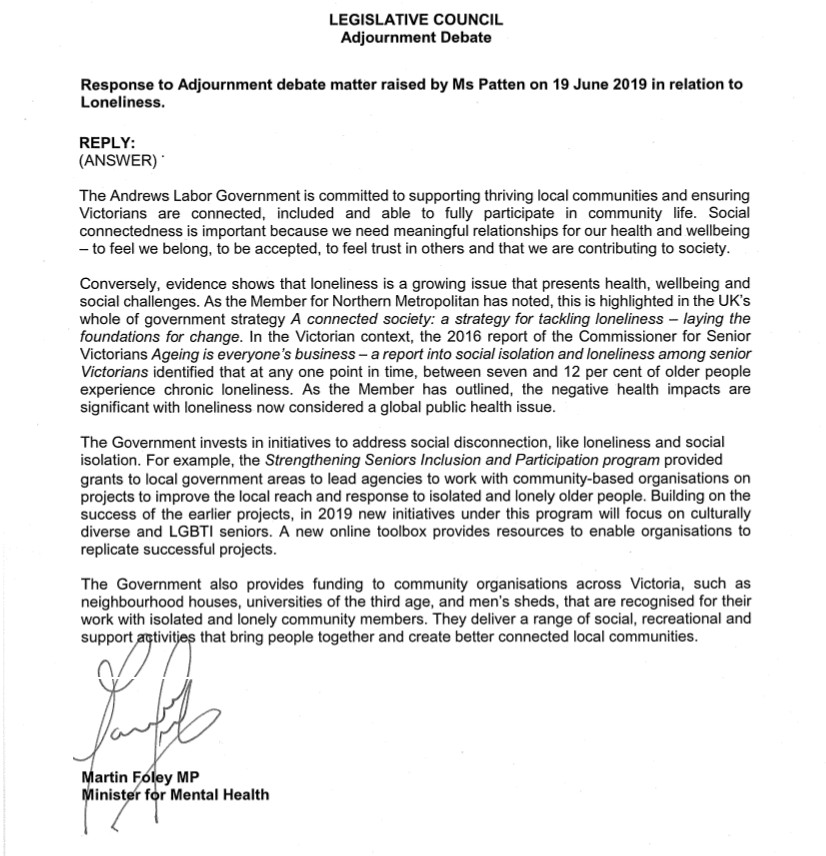