Ms PATTEN (Northern Metropolitan) (17:50): (1752) My adjournment matter is for the Minister for Education, and the action I am seeking today is for the minister to establish a menstrual champions pilot program in schools. It is really quite a straightforward idea. Nominated teachers are appointed menstrual champions for students to visit when they are having menstrual issues. The concept has been put to me by the Endo Help Foundation, that say that appointing several female teachers as menstrual coordinators or champions for students to seek out whenever they have a concern about their periods or pelvic pain would significantly reduce stigma and alleviate student anxieties.

This is not a new concept. I note there is some chuckling going on in the chamber, and this is part of the problem around talking around periods. There is still a lot of stigma. There is still a lot of discomfort about the issue, and I am pleased to say that I was just reading this afternoon that Her Excellency Dr Jeannette Young, the Governor of Queensland, has become a menstrual champion as well.

Now, this pilot could build on the free tampon program that is already in schools that is there to help reduce period poverty. This goes to reducing the stigma attached to periods and the fear. However, many schools are reporting a very low uptake on the free tampon program, and some teachers really suspect that this is due to stigma around menstrual issues and may be contributing to this low uptake, completely in co-ed schools. But now while this program is great, it is clear that students could benefit from more support with menstrual help. And this could also lead—and I think this is the most important part, that was really put to me certainly by a real champion, Kat Stanley, who has been a tireless campaigner around endometriosis—to earlier identification of medical conditions for endo. And we know that for some women it can take up to 20 years before they are diagnosed with endometriosis, so this is hopefully an early intervention.

So the action I am seeking from the Minister for Education is to trial a pilot scheme in co-ed schools in Northern Metropolitan to appoint teachers as menstrual champions so that all students know who they can turn to when they have an issue with their menstrual cycle. 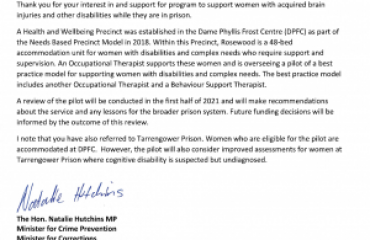