Past adoption practices - Fiona Patten - Leader of the Reason Party

My adjournment matter is for the Attorney-General, and the action I seek relates to the barriers to claims made by mothers whose children were forcibly adopted.

As many in this chamber would know, on 25 October 2012 the Victorian Parliament issued a formal apology to those harmed by past adoption practices in Victoria and acknowledged that many thousands of Victorian babies were taken from their mothers without informed consent.

I would just like to quote a little bit from that apology: We express our sincere sorrow and regret for the health and welfare policies that condoned the practice of forced separations. These were misguided, unwarranted, and they caused immeasurable pain. Between the 1950s and 1970s as many as 250 000 babies were taken from their mothers as a result of state government forced adoption practices.

However, given the passage of time between the conduct and the apology, claims for damages are barred by the Limitations of Actions Act 1958. Just as the Limitation of Actions Amendment (Child Abuse) Act 2015 removed the limitation period that applies to causes of action relating to death or personal injury relating to the child abuse, that limitation was removed to enable historical child abuse cases to be heard and compensated for.

The action that I seek is that the minister apply the same reasoning and consider establishing a mechanism to compensate mothers whose children were forcibly adopted. 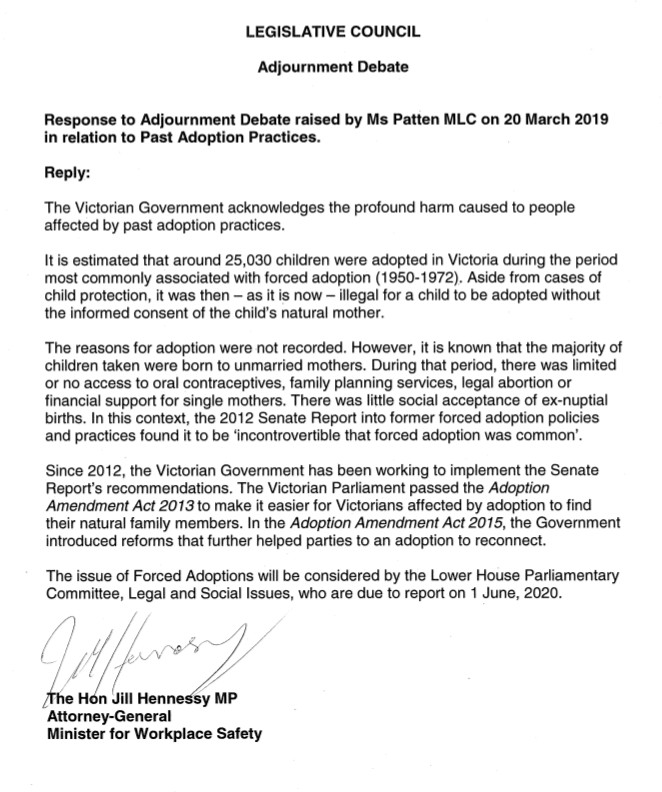