Ms PATTEN (Northern Metropolitan) (18:13:33): My adjournment matter is for the Special Minister for State, and the action I am seeking is an independent judicial inquiry.

As the minister would be aware, the IBAC Committee last year inquired into, considered and reported on—and I believe that the minister who is here today, Minister Symes, was on that committee—the external oversight and investigation of police corruption and misconduct in Victoria and made 69 sweeping recommendations.

IBAC have said that they are actually stumped to do this—they lack the resources. This is why I am calling for a judicial inquiry. We heard just this week that two victims of a police shooting were awarded $3 million. This is a case that went for two years.

These two people are lucky to have survived the shooting at Inflation nightclub, where one was shot in the back and the other was shot in the leg. Dale Ewins now has a colostomy bag, and Zita Sukys will never, ever recover from what happened. Yet after two years of the police defending their actions in the courts and the court finding that their actions were not responsible and that their actions were breaching on misconduct—and the two victims were awarded $3 million—it now becomes clear that the police have never actually investigated the incident themselves.

They said, ‘No, we can’t investigate it because it’s under investigation within the courts’. This is just ridiculous.

Given the seriousness of this matter and the failure of Victoria Police to heed the calls of the Premier and IBAC to investigate the shootings, I request that the minister urgently establishes an independent judicial inquiry. 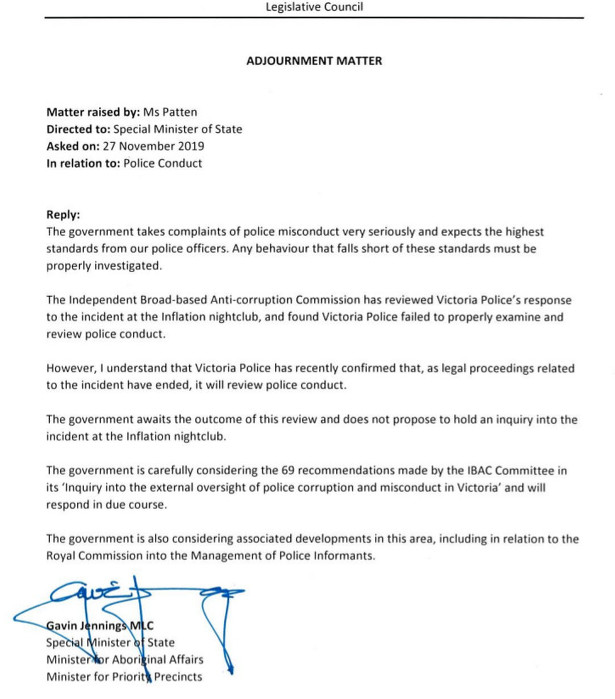