MS PATTEN (Northern Metropolitan) (12:27:52): My question is to the minister representing the Treasurer in this house, Mr Jennings. Cryptocurrency such as bitcoin, Ethereum, Ripple and TRON are now accepted as legitimate forms of assets and as payments for goods and services in Australia. Digital asset trading is now regulated and monitored by several bodies, including Australian Securities and Investments Commission, AUSTRAC, the Australian Taxation Office and through the Australian Digital Commerce Association. These digital assets, which use cryptography to secure their transaction, have become increasingly popular amongst the public, with billions of dollars transacted annually, while some of Australia’s largest cryptocurrency exchanges are based right here in Melbourne. My question is: what steps is the Victorian government taking to make cryptocurrency more widely accepted across government platforms now that it has become a legitimate form of asset and payment? Mr Dalidakis interjected.

Mr JENNINGS (South Eastern Metropolitan—Leader of the Government, Special Minister of State, Minister for Priority Precincts, Minister for Aboriginal Affairs) (12:29): I thank Ms Patten. I thank Mr Dalidakis for perhaps creating a segue through interjection about how my response may be framed in relation to Ms Patten’s question.

Ms Patten is associated, as we all know, with things that are out on the edge. She is pushing things out to the edge in a whole variety of areas. Sometimes there is an interesting mix between the risk and the opportunity that is associated with that push. Indeed I am very mindful of it because it is interesting in relation to this balance. I am mindful of the Chinese characters for the word ‘crisis’. Two characters come together: danger and opportunity—risk and opportunity in relation to this. China as a jurisdiction, for instance, refuses to engage with cryptocurrency because its assessment at this point in time is that it has got enough difficulty in managing its market systems and its regulatory environment. It does not want an additional problem, so it rules out cryptocurrency as being a viable option.

Finland, on the other side of the geographic connection, are very optimistic about it. They are completely open and they are 100 per cent with the program in relation to cryptocurrency. Russia is somewhat in between those two jurisdictions, both in terms of geography and in temperament. In Russia probably they are a bit interested in the adventurous side, perhaps some of the danger side. They have not actually quite worked out how influential they are going to be on the regulatory side.

I use those three jurisdictions in relation to the challenge. The challenge is: how mature is your system in terms of validating transactions that you may not actually have tangible assets for? Victoria was established in the gold rush, back in the days when the whole value of currency was determined on a fixed asset. We used to store gold just over here, so there was a very tangible connection between the value of money and the proposition that underpinned it.

In the world of cryptocurrency we are moving to an area where you may not be able to validate the real nature of a transaction, but you need to have information sources and technology that enables you to validate it at a particular point in time, hence the interest in blockchain. For the second time in two days I have had a conversation that relates to blockchain. We are clearly on the revolution in this chamber, because up until this time I do not think I have ever had it discussed at all. These are things that the Victorian government will be interested to see. As the Australian economy is opened up to this, the taxation regime has to take account of this. Victoria will be looking at ways in which we can get the balance right the between the risk and the opportunities.

MS PATTEN (Northern Metropolitan) (12:32:11): Thank you, Minister. I appreciate that response. I was actually in a convenience store this morning on the corner of Russell and Bourke streets and there is a bitcoin ATM there, so it is changing. By way of supplementary, the state of Victoria holds a multitude of assets and has deals in billions of dollars in transactions annually. Does the Victorian government currently use cryptocurrency—I think I know the answer there—in any of its financial dealings, and can the minister outline to the house what, if any, digital assets are currently held by the Victorian government?

Mr JENNINGS (South Eastern Metropolitan—Leader of the Government, Special Minister of State, Minister for Priority Precincts, Minister for Aboriginal Affairs) (12:32): I almost reckon that from my first answer you may have been able to work out whether we actually make transactions in cryptocurrency. No, we do not. In terms of the maturity of our systems and our regulatory environment and our technical capability at this point in time in relation to being early adopters or movers at a government level in relation to services, we are not at the cutting edge, but nobody is at the cutting edge of it in terms of government services across Australia. I am not quite sure how many jurisdictions across the world at a government level are leading that. Certainly Victoria is alive to these issues— actually understands the potential benefits and understands the risks—and we know that we have to be part of a worldwide digital movement in relation to these areas. Ultimately at the end of the day what Victorian citizens want is confidence and to be able to verify and validate the nature of transactions, and that is something that we will concentrate on: how do we guarantee confidence in the validity of a transaction? 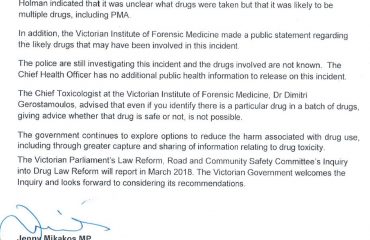