Ms PATTEN (Northern Metropolitan) (12:24): Keeping with the theme, my question is for Minister Jennings. Last night on the ABC’s 7.30 report there were serious concerns raised about the hugely popular social media app TikTok. TikTok is a Chinese-owned organisation that is proven to have significant ties to the Chinese Communist Party.

Some of Australia’s top cybersecurity experts are concerned about how much data users hand over, and the Australian Defence Force has now barred TikTok from all work devices.

The Premier is an enthusiastic user of TikTok and other social media apps, so I ask the minister: given the apprehensions around TikTok’s data collection, is the government concerned that the Premier’s personal data has been or is being compromised?

All I am saying now is that up until your question there may or may not have been paranoia throughout the Victorian government in relation to the Premier’s use of TikTok. As of this moment, this paranoia may be spreading rapidly. Away you go, Mr Davis. Ultimately at the end of the day the best issue is for us to take some advice on this matter and refer the appropriate advice to the Premier or any other user of TikTok for that reason.

Ms PATTEN (Northern Metropolitan) (12:26): Thank you, Minister. I appreciate you are trying to hold in the contagion of paranoia around this. It is very worthy. It actually is a nice segue to my supplementary, because recently I did speak to the Parliament IT department to ask whether there are rules relating to the downloading of social media and other apps to government work devices that MPs use.

Given these apps require access to microphones, cameras, contact lists, web history and other data, is the minister concerned that senior cabinet members, but also all MPs in this place, are having their data accessed by outside organisations or foreign government agencies, and is the government considering restricting the use of some of these apps on work devices supplied by the Parliament?

The PRESIDENT: The last question, thank you, Minister.

Mr JENNINGS (South Eastern Metropolitan—Leader of the Government, Special Minister of State, Minister for Priority Precincts, Minister for Aboriginal Affairs) (12:27): There are a chorus of people on the back bench here who are worried that you are asking me for an opinion in expressing whether I am concerned. 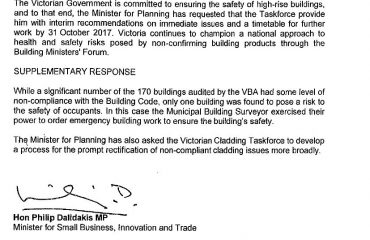 Harm minimisation? I don’t think so

Stigma of chronic pain in health