Ms PATTEN (Northern Metropolitan) (11:14): My question is for Minister for Local Government. When it comes to regional rates policy, governments of either colour have issued reports, reviews and recommendations but really taken very little action. In last Saturday’s edition of the Sunraysia Daily the editor wrote a column where he spoke about his sister, who lives in Box Hill. Her property is worth twice as much as his property on the outskirts of Mildura, yet she pays half the rates. So a person with a modest property in the most isolated part of the state is paying at least twice the rates of others closer to Melbourne. This is the definition of a broken system. What assurance can the government’s latest review give us that there will finally be some economic equity for our ratepayers in the regions?

I have got to say, comparing properties of the same value or more value in different councils does not provide an accurate comparison as it is up to each council to set rates each year within the mandated rate cap based on the services and infrastructure needs of their community. Councils use property values to apportion the council’s rates payable by each individual property in their municipality.

On the issue of rural councils and their sustainability, rural councils are very reliant on federal financial assistance, and we have been lobbying for more money from that fund to go to rural councils. I have had some really good interactions with the federal minister, Minister Coulton, and I have got to say he is actually quite a pleasure to work with. He has rural council sustainability on his radar as well. And I think every other jurisdiction, every other state and territory, actually has indicated this to the federal minister as well, as something to be looked at hopefully in the new year.

Rural council sustainability is an area that I am very keen to do some work on in the new year. The Premier has asked me to actually do work on that. I like the Premier; he is a good bloke, and I am happy to follow his instructions. I think there is some good work we can do.

I really take Ms Patten’s point. I have had a number of meetings with Rural Councils Victoria, the representative group, and they have said to me, ‘Please no more reviews, no more putting the chamber on notice, no references to committees’. They want something done about this issue. I have had a number of conversations with my colleagues, which include Ms Shing, Mr Gepp and the ministers that represent regional Victoria as well, over the last few months. I am keen to fulfil the Premier’s request that we do some real work on this, not a review. It is an issue. I have had a number of conversations with rural councils, and when you take into account the rural councils in the north-east that have been through the bushfires and then COVID this year, it is not an easy task for them. I have got to say, they do a great job. They do a great job, the rural councils. Our government is keen to work with them on their sustainability, and I am sure we will find ways to assist.

Ms PATTEN (Northern Metropolitan) (11:18): Thank you, Minister, and it is encouraging to hear that you are lobbying the federal minister. But again I think it sort of went back to, ‘Well, councils need to weigh this up’. My new colleague Ali Cupper, who has been on local government for many
years in Mildura, pointed out that it is a really difficult choice that they can either sort of put up their rates or they cut their services. I think you did allude to that. But what she was pointing out to me is that there is a simple change that could be made to the formula for the distribution of those federal assistance grants and that you as a state government could actually just turn the dial slightly. So I guess I am asking: would you finally look at taking that step?

Mr LEANE (Eastern Metropolitan—Minister for Local Government, Minister for Suburban Development, Minister for Veterans) (11:19): I thank Ms Patten for her question. As I stated, I think the issue is that obviously it is a federal fund. It does get administered by the state, but there is a requirement that there is a minimum payment to each council. So you have councils like Melbourne City Council and Whitehorse, as you mentioned, and probably the amount of money they receive does not make a great difference to their budget, whereas if that amount of money went to, say, East Gippsland, Towong or Buloke, it would make a huge difference.
So this is a conversation that I am having with the federal minister. As I said, it is a federal fund. We have lobbied for more in that fund, but of course they have to have parameters around it as well, being a federal fund. But I think that is the sort of conversation that, as I said, most states and territories have really got their eye on; this is a national issue. As I said, I am really keen to work in this area and happy to get any advice from anyone that is keen to give it to me on this. 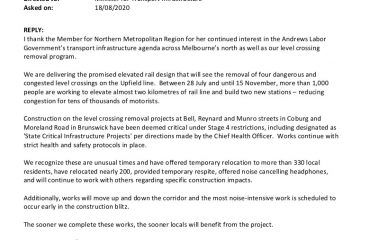