Ms PATTEN (Northern Metropolitan) (13:00): My constituency question is for the Minister for Planning. I have had several angry constituents contact my office after seeing reports in the media that the government-commissioned report on the North East Link has revealed the builders of the project underestimated the scale of tree loss by as much as 80 per cent. It would seem even before the project’s major construction starts later this year builders CPB Contractors have been caught bypassing the new benchmarks that were set following an extensive environmental assessment by severely underestimating the scale of tree loss. This misreporting is estimated to be hundreds of square metres of lost trees, a lot more than was originally approved by the minister. What actions will the minister be taking to ensure that tree loss is no greater than was originally proposed on the North East Link Project?

Answered: 6 July 2021
I note a recent article in the Age reporting tree canopy for the project. This was about the calculation of canopy loss relating to three trees. The three trees were approved to be removed, and their canopy was measured using a standard that was different to the one being used for the rest of the project.

There is currently no standard industry approach to canopy measurement. I am advised the project is developing a consistent standard to be used for all future canopy measurement. This means that as the two-for-one tree replanting program rolls out, the canopy gains by those trees planted will relate directly to the loss recorded.

The most recent independent environmental auditor (IEA) report – publicly available on the project website – picked up the issue and flagged a discrepancy in the measurement of tree canopy by a contractor’s arborist relating to three trees. Having a robust, independent auditing program like this is keeping the project accountable – issues are found, reported and addressed. 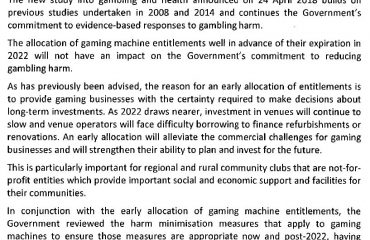