Ms PATTEN (Northern Metropolitan) (13:10): My question is for the Minister for Public Transport. A recent RACV survey found South Kensington station to be the worst train station in Victoria—rated by commuters.

The biennial survey saw commuters calling out safety concerns and complaining of a lack of shelter and lack of parking as their key gripes. The station scored just 2.48 out of 10, the lowest score recorded by any station since the survey began in 2013.

The station has been completely neglected over the last 15 years. My question is: what is the minister doing to ensure that upgrades are made to the station to make it safer and usable for the people of Kensington? 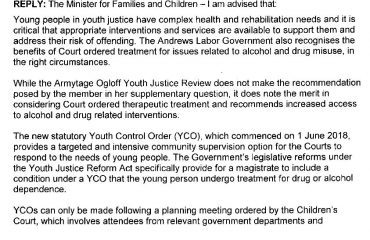