Will gov listen to experts? - Fionapatten

Will gov listen to experts?

Ms PATTEN (Northern Metropolitan) — My question is to the Special Minister of State. The purpose of parliamentary committee inquiries is to investigate issues before the Parliament and to help inform the legislation we are to vote on, but there is a trend of pushing ahead with bills despite committees being yet to hand down reports. Reforms to the taxi industry and new laws on synthetic drugs are just two examples where the government is pushing ahead with legislation despite parliamentary committees still hearing the views of experts and diligently investigating the issues. Given the government’s approach of forging ahead despite committees being yet to hand down reports, can the minister confirm its commitment to listening to experts as part of its transparency and integrity agenda?

Ms PATTEN (Northern Metropolitan) — Thank you, Minister. I do note that the government has supported a number of the inquiries, particularly the ones that I mentioned, so obviously there was support for listening to those experts, but it seems that the legislative agenda has got ahead of that. So my supplementary question is: why does the government not delay its changes on synthetic drugs until after the Law Reform, Road, and Community Safety Committee has completed its inquiry into drug law reform so that the government can fashion its laws informed by the experts, like the 17 senior law enforcement experts who this week called for governments to work towards the decriminalisation of drugs? 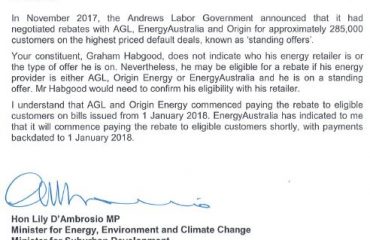 Energy Rebate – where is it?